Despite a slight back injury causing some delays, I've been collecting matrix for my PhD project which is a microvertebrate study of the Scollard Fm here in Alberta. One very nice Saturday, Darren, Natasha and I visited and collected from a productive road cut. 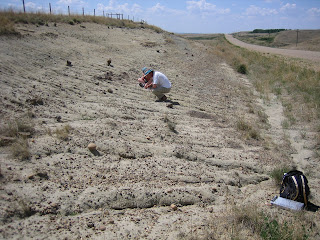 We found a nice layer where Ornithischian tooth fragments, gar and other fish scales, crocodile teeth, etc (all typical Scollard microfossils) were eroding out. 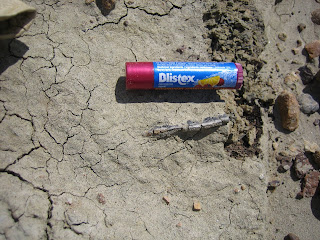 Also found was this turtle plate that was surprisingly complete. I have, of course, lost my usual scale bar and had forgotten my new one, so made due with the Blistex tube that I always have with me. I've been accused of being addicted to the stuff in the past, but I always figured there are worse things to be addicted to. : ) 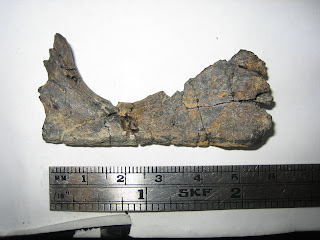 Anyway, the turtle plate turned out to be a Chelydrid hypoplastron which Dr. Don Brinkman (of the Royal Tyrrell Museum and my co-supervisor) seemed pleased with.
We ended up collecting 7 bags of test matrix and I'm excited to get the material washed next week. I'll then sort through it, picking out the fossils and doing my best to identify them (I'm still new at this) and decide whether it's worth going back to do major collection.
This is just one of six sites I've seen thus far and I hope to visit more further north on the Red Deer River soon. I'll do my best to update the blog as I go along.
I did want to mention that in Alberta, one must have an excavation permit to collect matrix or do anything other than surface collect and to be sure that you always have proper landowner permission before going onto any site.
Posted by Patty R. at 11:53 AM 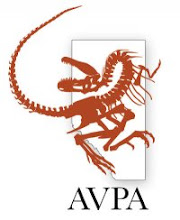